Audio, Video, Slides, CD-ROM, Web pages in the Language of Your Choice 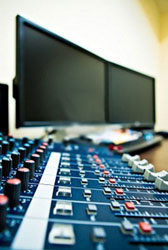 UNIVERSE can deliver film dubbing, voice over, CD-ROM production - all in digital or analog format. Our narration services include a choice of male/female voice-overs, as well as a choice of studio.